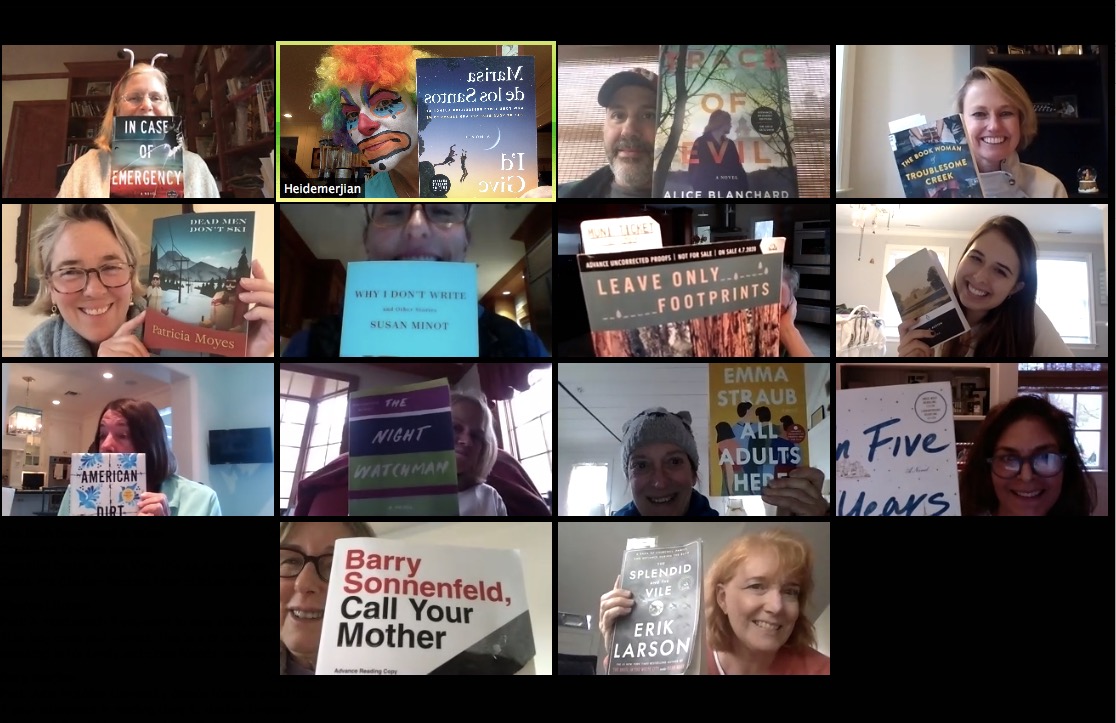 Greetings from the staff at Elm Street Books! Here are some staff book faves, both old and new!

Wunderland, by Jennifer Cody Epstein
An engrossing family drama that takes place in prewar Berlin and late 1980’s NYC.
It’s a heartbreaking, but hopeful page-turner, that traces the lives of three women across two generations, and the repercussions of choices made.
I absolutely loved this wonderful book!!
Marjorie Morningstar,  by Herman Wouk
When asked,  I always name this my favorite book.  I first read it as a teenager and reread it every 10 years or so.  It’s about a Jewish girl’s life in NYC pre WWII; her hopes and dreams, young romance, and growing up.  Didn’t we all have a Noel Airman in our lives?!   Enjoy this oldie but goodie!

The Penderwicks~ by Jeanne Birdsall: This story follows four sisters and their adventures while they are on summer vacation.  Between befriending a mysterious boy, overcoming the evil property owner, and exploring the beautiful grounds of the Arundel estate, there is never a dull moment for the family.  It’s a book that I constantly find myself revisiting because of it’s timeless manner and nostalgic feeling.

Adult Pick-
In Cold Blood~ by Truman Capote: After the Clutter family is murdered in their house in Kansas, there is a desperate search to find the perpetrators of this savage crime.  The story follows not only the town of Holcomb and events following the murder, but the journey of the two criminals until the end, when the full plot finally unravels. This takes a classic murder mystery, but approaches it from an entirely different angle, and puts you into the minds of the killers.
From Fanny:
The Body: A Guide for Occupants by Bill Bryson - As a friend said, Bryson has the uncanny ability to take a complex topic and make it digestible to the average person, and he does it with humor. The book is broken down into chapters covering the brain, the head, the skeleton, heart and blood, etc and it can be read in short bursts. This is a book for everyone who wants to know more about that mysterious thing they inhabit.
Being Mortal by Atul Gawande - With grace, Dr. Gawande talks about preparing for the end of life: The difficult conversations families need to have in order to see that wishes are followed. This book should be required reading for everyone.
Paris in the Present Tense by Mark Helprin - WONDERFULLY written story of a widowed, aging music teacher whose grandson has a medical condition. He finds a way to help his daughter and her family find the life saving care he needs.
River of Doubt by Candace Millard - Riveting true story of Teddy Roosevelt's ill equipped nearly disastrous trip down the Amazon with his son. Excellent book!
The Shift: One Nurse, 12 hours, 4 Patient's Lives by T. Brown - Fascinating look at a nurse's hectic 12 hours in an oncology ward. Sounds grim, but it's actually quite good.

Dead Wake by Eric Larson - History of the sinking of the Lusitania from the perspectives of the passengers, the ship's captain, and crew as well as the Uboat Captain. Really well done!

Maybe You Should Talk to Someone by Lori Gottlieb - Grabbed me at page one. Lori Gottlieb is a therapist who shares a birds eye view of the lives of four of her patients. After the break up with her boyfriend she is devastated and begins to see a therapist herself. In this book she weaves her patient's sessions with her personal therapy sessions. Everyone should read this insightfiul, warm, engaging and funny book.

Everywhere You Don't Belong by Gabriel Bump - Wonderful debut novel! Claude is a young black man in search of a place where he can fit in. Born on the south side of Chicago he tries to "craft his own identity". Both poignant and laugh out loud funny. I fell in love with Claude!

8 Perfect Murders by Peter Swanson - Take a classic mystery ride as Malcolm Kershaw, owner of Old Devils Bookstore in Boston becomes part suspect, part aid with regard to numeous unsolved murders eerily similar to his top 8 murder mystery book list. You'll find a treasure trove of classics that you may want to go back and re-read; Christie, Cain, etc.

The Mountain Sings by Nguyen Phan Que Mai - Vivid and lyrical portrayal of 20th century Vietnamese culture told through alternating voices between a grandmother who survived nightmarish events and made heart wrenching decisions and a gradndaughter coming of age during the Vietnam war. Stunning and moving throughout. A gem!

The Splendid and the Vile by Erik Larson – Larson’s writing is so honest and intimate I found myself even reading the notes when I finished.  He allows us to be a fly on the wall of history and shadow Churchill during 1940 and 1941 as he steps up to lead the resilient English in the face of Hitler’s relentless attacks.  I gained insight into Churchill’s family and working relationships, and laughed out loud at Churchill’s many hilarious personal quirks.

American Dirt by Jeanine Cummins – An especially poignant historical novel set in Mexico, this book brilliantly captures the terror and power of the Mexican drug cartels and one family’s attempt to survive their wrath.  A totally engrossing read, this will be one of my favorites of 2020.

Hidden History of Guns and the 2nd Amendment  by Thom Hartmann - An important book.  An avid gun owner elucidates the original intentions of the original framers and the compromise needed to have the slave owning states ratify of the whole constitution.  Traces 200 years of evolution of gun ownership up to and including the present day usurpation by the NRA and the gun manufacturers and their further corruption of the intent of the founding fathers.

No Sunscreen for the Dead  by Tim Dorsey - If you have any sense of humor you should be reading his books.  Sooo much better than Carl Hiaasen.  This time the plot involves the Sixties and the cold war, compromised witness protection identities, heroic old people and the usual bona fide, historical Floridian landmarks.  Of course, the plot would not be complete without Serge’s inventive ways of disposing of those who deserve to be gotten rid of.

The Cactus League  by Emily Nemens - Missing preseason?  Just read this.  A novel, multifaceted look at what really goes on before the season opener from walk-ons trying to make it in the big leagues to a troubled MVP to women who just can’t give up bedding baseball players. Not as funny as Major League, but more deeply human and very absorptive writing.  Made me also want to find out more on how the author knows so much about her subject.

The Book of Ebenezer LePage  by E. B. Edwards - Recently reprinted in the New York Review of Books classic series.  Front page NYTimes review in 1982.  Included in 1,000 Books to Read Before You Die.  Falls somewhere closer to Thomas Hardy than James Joyce (though it takes place in the Channel Islands).  Great fiercely independent, cantankerous, opinionated main character…probably why I love this book and was my best selling literary fiction that year when I owned a bookstore in Greenwich.